We Need to Abolish Sports Commentary

Each week, millions of Americans gather around their television screens to watch professional sports. Living rooms are stocked with chips and dip as fans cheer for their favorite teams. However, through all the excitement, a key fixture of the broadcast is overlooked: sports commentary. Seldom noticed is the fact that viewers are forcibly subjected to narrations from (dominantly) men wearing headsets in response to every single play in the game. With the Super Bowl around the corner, it is time we abolish this custom, for a few reasons:

We Are Not Using the Radio

For the die-hard fans who have the misfortune of being away from a television during a big game, radio telecasts are necessary. This audio-based medium demands a play-by-play analysis because listeners are deprived of sight. The narrations of a witness – the sports commentator – is the only way listeners can understand the events in question.

Sports commentary makes sense on the radio, but not on television. Since viewers are able to witness the actions in real-time, the commentary is completely useless. Whenever a sportscaster announces that “Tom Brady just threw for another first down!” my reaction is: … I know. I saw it. Televised sports commentators have mastered the art of stating the obvious.

Imagine, for a moment, that you have one ticket to see your favorite sports team. You are looking forward to seeing the action and feeling the electric atmosphere. You arrive at the venue and take your seat in the row – but it is between two people you do not know. As the game starts, the stranger on your left begins to summarize every play, and the stranger on your right begins to analyze every play. It then becomes clear that they are not talking to you at all, they are talking to each other. You just have the misfortune of being stuck in the middle.

How long before you either tell the strangers to be quiet or attempt to move your seat? Does this sound like a pleasurable experience? Of course not! But this is the exact predicament viewers find themselves trapped in whenever they watch a game on television. Viewers are at the whim of at least two sportscasters who refuse to give them an opportunity to speak. Since the commentators are having a conversation among themselves, the general public should not be held hostage. They can take their lame sports chatter somewhere else. To circumvent this issue, I once tried to watch the game with the television on mute, only to discover I needed the energy from other fans. Here is my demand to broadcasters: give us the raw footage and audio from the game, and stop coercing us into hearing endless drivel from pseudo-analysts.

Most commentators are former athletes and/or coaches in the sports they are analyzing. The expertise of these individuals, however, comes across as pretentious.

For example: the clothes of sportscasters. Football stadiums are packed with tens of thousands of fans wearing jeans, jerseys, and sneakers. Truly devout supporters often paint their bodies to match the uniforms of their favorite team. At any given time, 22 sweaty players are tackling each other into dirt. Viewers are at home with pizza crumbs on their T-shirts. Meanwhile, sportscasters are isolated in lofts dressed like this: 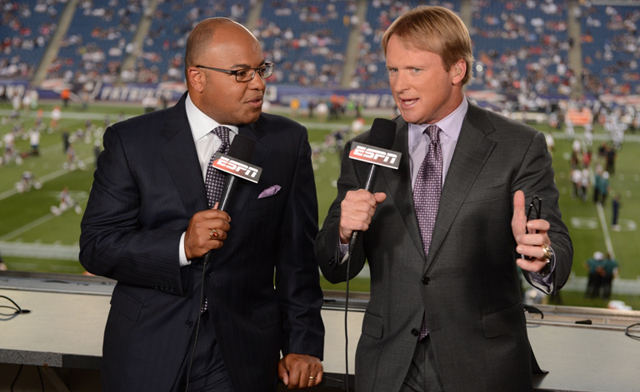 Just look at these clowns. Who shows up to a football game in a suit!? Come on! They are out of touch. This tells us that they are not real football fans; they are just parasites feeding off the culture. Why should we listen to their opinion!? They are not like us! I would much rather hear the thoughts of people who get drunk at their local bars watching the game each week … at least I know they are genuine!

The pretentious clothing is only compounded by their pretentious language. Our eyes and eardrums are mercilessly bombarded with pointless statistics about the game. To preserve their pitiful positions, commentators create ‘world records’ for the sake of declaring them broken later on. John Madden and other prominent has-beens make announcements such as “Joe Benchwarmer just broke the record for being the tallest person to run 3 yards after 10:00 in the evening!” News flash: no one cares.

The very existence of the sports commentator assumes that the masses of people are incapable of forming an opinion without guidance. We do not need our hands held by self-appointed father-figures. We need silence during the game.

44 thoughts on “We Need to Abolish Sports Commentary”